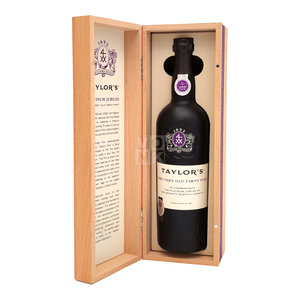 To commemorate the platinum jubilee of Her Majesty Queen Elizabeth II

On 6th February 2022, Her Majesty The Queen became the first British Monarch to celebrate a Platinum Jubilee, marking 70 years of service to the people of the United Kingdom, the Realms and the Commonwealth.

To celebrate this unprecedented anniversary, Taylor's Port, a Royal Warrant Holder to HM The Queen decided to bottle a Very Very Old Tawny Port. This Port is drawn from our extensive reserves of the finest wood aged wines, which have been maturing in seasoned oak casks, since the Queen succeeed to the throne. Silently attesting to Her Majesty's extraordinary reign as the longest serving Monarch in British history.