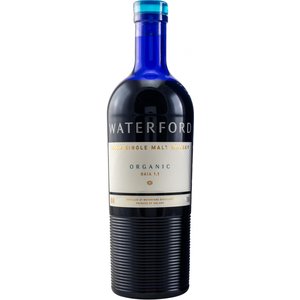 The Waterford Organic Gaia 1.1 is the first organic Irish whisky as certified by the Organic Trust, having met rigorous production regimens and audits.

A century ago organic malting barley would have been ubiquitous in Ireland; today it is frustratingly rare. When we started the organic project in 2015 – our quest to go back in time to explore alternative farming methods – the volumes of Irish organic malting barley from any one farm were so small there was no possibility of distilling them as a Single Farm Origin. So given the incredibly low yields of organic barley, prior to distillation we combined these crops together as one batch, in contrast to our the other Waterford distillations.

The Organic Gaia 1.1 is fully matured in a spectrum of super-premium oak: 42% first-fill US oak, 17% virgin US oak, 18% Vin Doux Naturel – sweet fortified wines – and 23% premium French oak. It’s bottled at 50% ABV without colouring, chill-filtration or any additives.