Home / Brands / Hair of the Dog

Home » Brands » Hair of the Dog

Hair of the Dog

No hair in your beer; the name of this American brewery refers to the English expression 'I'm drinking the hair of the dog that bit me', which you use when you drink an alcoholic snack to get rid of your hangover.
We are very pleased with Hair of the Dog in our range: as one of the few in the Netherlands, maybe even the only point of sale. And these beers are always perfect, taste it for yourself…

Family brewery
Hair of the Dog Brewing Company is a family brewery that was founded in 1993 in Portland, Oregon. They produce over 600 barrels of beer per year and bottle about 5000 cases per year. The rest of their beer is served in the tasting room, at a few select points in Oregon and even fewer outside (we!).

Unique
Characteristic for Hair of the Dog is creativity and originality; each beer has its own unique identity. “Like the people who inspired us for the beer,” said HotD.
They pride themselves on being one of the first breweries in America to specialize in the production of high alcohol beers. They also like to experiment with barrel aging: currently the brewery has 180 oak barrels that are used to age beer, from 6 months to 8 years.

Local
They like to work with local products and 99% of their ingredients are also produced within a radius of 500 kilometers from the brewery. Their organic pilsner malt is from Gambrinus Malting in British Columbia, the water is pure from the Cascade Mountains, hops are grown in Oregon and Washington, and their bottles and labels are made in Portland.
The original brewing equipment was recycled from other industries and is still in use today. After brewing, all ingredients are used by a local farmer for animal feed.

Rare
Hair of the Dog beers are a bit pricey due to high import costs, but at least you know for sure that you have something good in your hands. And what is the price, by the way, when you consider that they once made a very rare beer of 19 years old. This Barleywine named Dave had a price tag of no less than $2000… 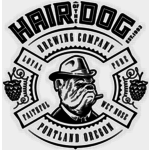 Hair of the Dog Cherry Adam - From The Wood