Rutte & zn is a craft distillery from the city of Dordrecht, in the Dutch province of South Holland.

The products include jenever, liqueur and eau de vie. In addition to young and old gin, Rutte also sells aged gin under the names Oude Vijf and Oude Twaalf. In addition, all kinds of seasonal products are made, such as wild fruit liqueur and blackthorn liqueur. In total, the range covers about 55 distillates. Around 1830 Simon Rutte settled in Dordrecht and in 1872 he moved into a building in the Vriesestraat where the distillery and the shop are still located 6 generations later. The Tasting Room and Museum Rutte are now set up in the former living room. 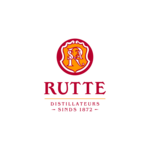