Douglas Laing's was founded in 1948 by Fred Douglas Laing. From 1972 he was assisted by his son, Fred Hamilton Laing, and in 1990 Fred Laing received the Award for Export from the Queen of England. The Big Peat whiskey has been around since 2009 and it is still widely available. In 2013, Douglas Laing developed the new Scallywag whisky, in 2014 came the Timorous Beastie and in 2015 the Rock Oyster was created, and the Remarkable Regional Malts were born. 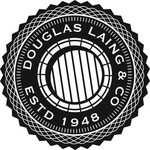