The Glen Scotia Distillery is located in the town of Campbeltown and was built in 1832 by the Stewart and Galbraith families. The distillery's first name was Scotia and means "the valley of Scotland". “Glen” was added to the name in 1939. In 1895 Scotia was sold to Duncan MacCallum, who was forced to close the distillery in 1928 due to poor results. He was so distraught that he drowned himself in the Campbeltown Loch in 1930. In the same year the distillery was bought by the Bloch Brothers, also owners of the Scapa Distillery. Due to the rising demand for Campbeltown whiskeys in those years, Glen Scotia was one of three distilleries that could go directly into production again in the 1930s (1933). The other distilleries, about 28 units, were completely dismantled after the closure, the stills and washbacks were sold immediately after the closure and the roofs were also removed from the buildings. In the past, the owners of real estate that could still be used, even if it was vacant, had to pay tax. The building was unusable if the roof was off, so no taxes had to be paid. In 1954 the distillery was sold to Hiram Walkers & Sons Ltd. After another takeover and an extensive renovation in the years 1979-1982, the distillery closed in 1984. Production started again in 1989 under a new owner, but again a new owner puts the distillery under mothballs again in 1994. Glen Scotia is eventually bought by Loch Lomond Distillery Co Ltd in 1999. Initially, the distillery will be run under the supervision of Springbank, but from May 2000 Glen Scotia will be running with its own staff. In the small distillery there is only one wash still and one spirit still that are heated with steam. The six washbacks are made of stainless steel. The water for the production comes from Cross Hill Loch, an artificial lake created by the Duke of Argyll to supply the distilleries in Campbeltown. Glen Scotia also has two artesian water sources some 100 meters deep, which are located below the distillery. 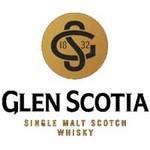